Week 2 in the NBA: Where the men are separated from the men who can’t grow facial hair.

Now that all the hype of the first week has died down, it’s time to face facts, get over our overreactions and finally start putting things in perspective. No, the Rockets really aren’t that bad. Yes, the 76ers really are. And yes, the Knicks will continue to play the ‘not-triangle on offense’. We’re with Mr. Bryant on that one.

Here’s a quick roundup of this week’s biggest winners and losers:

So, it’s official: The Beard is back.

One week after leading his Houston Rockets to a disappointing 0-3 record to start the season, last season’s MVP runner-up has finally regained his rhythm.

Harden has now scored 40+ points in back-to-back games, including a season-high 46 points during their 109-105 victory against the Clippers on Saturday night. A total just shy of his career-high of 51.

For the week, the three-time All Star averaged 38.5 points, 5.5 rebounds and 5.5 assists, and shot 46.4% from the floor. Numbers which are even more impressive when opponents included both the Clippers, and fellow conference rivals OKC.

So Houston, it’s turns out we might not have a problem after all. Maybe it just takes a week longer to heat up in Texas… 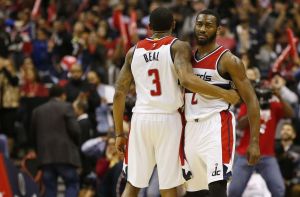 Unfortunately, things haven’t been quite as successful in DC this week.

Aside from a respectable home win against the Spurs on Thursday night, the Wiz lost both of their other games this week. And it wasn’t so much the losses that are a cause for concern for the men from the nation’s capital, but the manner in which they lost – both virtual blowouts in games they arguably should be dominating (against Boston and Atlanta, respectively).

To make matters worse, star shooting guard Bradley Beal hurt his shoulder on Saturday and is questionable for their next matchup against the Thunder. Not exactly ideal timing, even if the injury doesn’t look as serious as initially thought.

The main problem is, in a relatively weak Eastern Conference, this was supposed to be the year that John Wall and company broke out and made up some ground as one of the top teams. Unfortunately, for a team that ranks worst in the league on turnovers and in the bottom third on D, that looks like it will be an uphill struggle.

They might play exciting, offensive basketball, but for the Wizards to finally start moving forward, they need to go back to basics. And quickly.