Some things are just better in the dark.

Beach-side bonfires. Scary movies. Dancing (shout out Bruce Springsteen). And of course, the all-time number one…

By which we mean candle-light dinners, obviously.

One thing which doesn’t usually fit into this category is Basketball. But last night against the Bucks, Blake Griffin didn’t seem to care – as he casually drained a free throw after the lights went out in the Staples Center.

However, to avoid dangerous situations, always avoid dunking in the dark. Even Blake would have trouble making that look good. 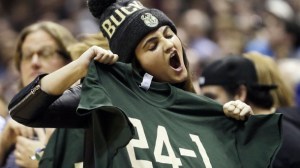 Here at UKNBA, we hate to jump on the bandwagon. However, in our continued effort to provide more relevant, regular and engaging content, we’ve decided it’s time to change our ways. So expect a lot more bandwagon-jumping as the season draws to a close and the play-offs begin. And, as bandwagon’s go, we couldn’t really have picked a better one to start with.

OK, we know we’re late to this one, but here goes: Brandon Knight (or more accurately DeAndre Jordan) broke the internet. If you haven’t seen the monster dunk in question, see below. Jordan’s dunk, coming courtesy of a Chris Paul lob in the second quarter, was as good as any of his famous namesakes. The Clipper’s eventually won this bout with the Pistons 129-97, but it was Brandon Knight’s name that remains on everyone’s lips.

Sure, Knight could maybe have moved a little more, but when the guy you’re up against has half a foot and over 50 pounds on you, it doesn’t really seem like a fair fight. Luckily, Knight seemed to find the funny side, tweeting:

Keep that chin up Brandon Knight. Because those jokes aren’t going away any time soon… 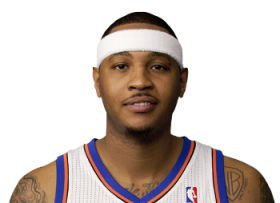 Verdict – OK, so we know that Melo is the more complete player. But for sheer flair (and for flair, read height) we’ll take Blake on this one. Also, the advert below wins him major kudos. Bingo…

Advantages: Scoring, rebounding, assists, NBA champion, regular season MVP, finals MVP, youngest player to 20,000 pts, ONLY player ever to score at least 30 pts and shoot at least 60% from the field. There’s a lot more we could say, but running out of room…

Verdict – If KD was up against anyone else he would walk it. Time is on his side, and he may yet eclipse James in years to come. But right now, it’s got to be the King… (See also: last year’s finals)

So, with the All Star Game little under a week away, it’s time for some predictions. And while we’re not going to be bold enough to come up with a score, all this week we’ll be concentrating on the starters for each conference. First up? Chris Paul vs. Brook Lopez. 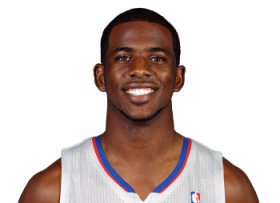 Disadvantages: May struggle rebounding, been out for a while,

Verdict – Lopez is having a great season for the nets, but we’ll take CP3 all day long in this one.

OK, so we realise that this post should really have gone up yesterday. But, the fact that there were very few games yesterday, coupled with the terrible weather, means that we feel entitled to stretch the rules of relevancy. Also, it was a day that deserves to be remembered for a lot more than basketball. But mostly, we blame the snow.

Here are 3 things we learned from Monday’s action:

Pacers vs. Grizzlies will not set the world alight

The first game of the day was Pacers vs. Grizzlies. Played in Memphis, it seemed quite fitting. The problem was, the two teams were never going to provide the showpiece game that the occasion required. Both teams rank in the top five defenses, and stink on offense. And don’t let the relatively dramatic finish fool you, this one was dull. With Indiana leading the Central, and gaining pace (sorry) in the East, their game plan is clearly working. Just don’t expect showtime in Indy anytime soon…(or Tennessee – sorry Grizz fans). 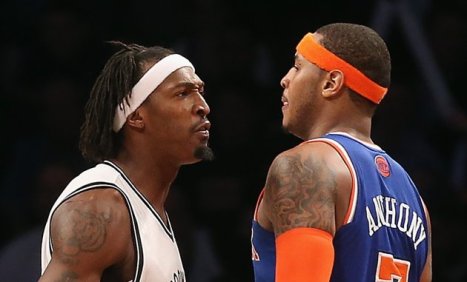 Nets vs. Knicks rivalry is just heating up

New York lost to their neighbours at the Garden, to tie the series at 2-2 for the season. Not only was the game close, finishing 88-85 in favour of Brooklyn, but it even had post-game drama (See: J.R. Smith and Kris Humphries trash talking on twitter). If it wasn’t for Carmelo going cold in the fourth, it genuinely could have gone either way. The Nets are now 11-2 under P.J. Carlesimo, and only one game back in the Atlantic. Although they’re done squaring off in the regular season, we have a feeling that this rivalry has only just begun…

Before they took on the Bulls on Monday night, head coach Mike D’Antoni announced that he would be benching Pau Gasol for the foreseeable future. With the Spaniard struggling to fit into D’Antoni’s system, and the trade deadline looming, it may be coming to the end of Pau’s time in Hollywood. Although he’s by no means the only one struggling (we’re looking at you Dwight Howard and Steve Nash), he is potentially the most expendable. And with Gasol as good as stating that he’d consider moving on to pastures new, it might only be a matter of time.

The question is, where would he go?

The third ever regular season game played in the UK took place last night. The Knicks beat the Pistons 102-87. The result itself was almost a forgone conclusion, with New York heavily favoured from the outset. But for basketball lovers in the UK, the impact of the game could prove far greater than what was on the scoreboard at the end of the night…

There were a lot of positives to the game, and none more so than the increased exposure of the sport this side of the Atlantic. At the start of the season, no games were even being televised in the UK. As part of their agreement to show NBA London, Sky announced that they will be showing games on Sundays for the rest of the season. NBA is back. And this time, no subscription is required.

Aside from TV coverage, the game at the O2 was a sell-out. Despite the inflated ticket prices, almost 20,000 fans were in attendance to see Carmello and company amble their way to victory. Whatever their previous basketball experience, the crowd was energetic and it seemed like there was a genuinely good atmosphere. Not only does this mean more attention is being given to the sport, it also means that the league is likely to want to come back.

Also, we’re huge fans of Kevin Cadle in a makeshift studio (and watching basketball at a reasonable hour).

Sure, the game could have been more competitive. And sure, it would have been nice to have a more instantly recognisable team than the Pistons (who were, incidentally, meant to be at home – despite New York supporters outnumbering Piston supporters roughly 1295 to 1). The main problem however, unfortunately came with the amateur nature of the coverage.

Firstly, aside from the very talented and under appreciated Kevin Cadle (did we mention we like Kevin Cadle), the commentary team left a lot to be desired. Mike Shaft and Rob Paternostro unfortunately provided the bulk of it. While the latter (who is coach of the Leicester Riders British basketball team) actually performed pretty well, the former was just far too excitable to be taken seriously.

Shaft, who used to provide UK Basketball coverage, and has an extensive background in radio presenting. However, last night it sounded like he’d never watched a game before in his life. Alternating between ‘Wow’ and ‘Oh baby’ for every lay-up, his enthusiasm was only matched by his use of stock phrases (‘nothing but net’ being a particular favourite).

We’re sure he’s a very good commentator, and will grow back in to the role as the weeks go on, so we’re prepared to give him the benefit of the doubt. But saying ‘we have a ten (or less) point ball game’ at every available opportunity is not particularly helping his cause. This is basketball Mike. It will be a 10 or less point game quite often. And that’s OK.

Add to this the unreliable virtual scoreboard, which either didn’t have a shot clock or simply disappeared, and roving reporter Julie Collier, who was very nice but had a hard time actually listening to her interviewee’s answers, and it’s clear that Sky don’t really know what to do with their live coverage yet.

With their NFL offering of a consistently high standard, there is definitely hope for the NBA. If they don’t manage to do the same, well hey. It’s just nice to have it back.

N.B. Hopefully they will also stop speaking about a potential European franchise at every opportunity. One step at a time…